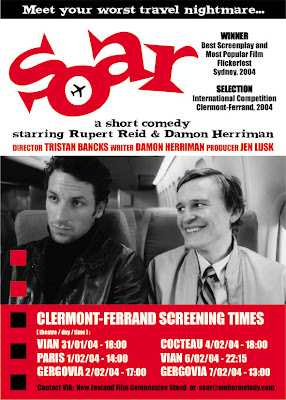 My 20-minute movie, Soar, will screen on the Movie Network on June 2. It’s part of a new series called Flickerfest on Extra. Soar will be in episode three.

Soar is about everyone’s worst travel nightmare – getting stuck on a plane next to an obnoxious dork when there are no spare seats.

The film has previously screened on Qantas Inflight and the US Sundance Channel as well as TV screenings in Scandinavia, Palestine, Israel and lots of other interesting places. Soar was written by Damon Herriman and stars Damon Herriman and Rupert Reid.

Hope you catch it! For more on Soar, you can click here.