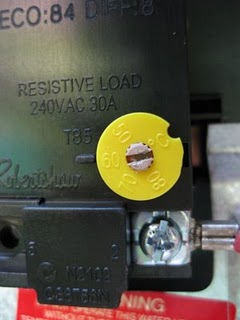 That was a simulation of me being scalded in the shower when somebody in another room turned on the tap. Quite realistic, huh?

My hot water is so hot that I always have to mix it with cold to use it. Most hot water heaters are set to 75 celsius (167 Fahrenheit) or higher, burning tonnes of fossil fuels unnecessarily.

I figure I’ll avoid third-degree burns, save a stack of cash and change the world by turning it down to 60 celsius (140 Fahrenheit). If you’re not an adult, pressure your folks to do it.

It actually only takes four minutes, leaving a lazy minute to kick back and smell the compost… or whatever else is close to yr hot water heater.