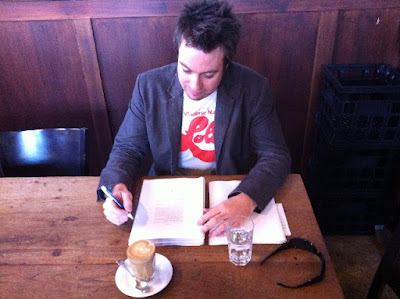 James Phelan, author of the Lachlan Fox thrillers and Young Adult series Alone and takes us inside his writing space and process. I’ve been lucky enough to spend time with James at writers fests and events over the past couple of years. He is a fascinating man. Funny, positive, self-deprecating, he was once a journalist at The Age, studied as an architect, did his PHD on children’s literature and began writing his first novel at age 15. Hope you enjoy hanging out with him…

Where did you write your latest book? How important to you is the space in which you write?
ALONE: Quarantine, the final book in the Alone trilogy, was written at cafes and at home, and a bit on the road while touring and traveling. I can write anywhere and almost any time, but what I need to sort out is my own headspace. Music helps, and for the entire trilogy I listened to a loop of all of Radiohead’s music (both their own recordings and covers), usually on shuffle via iTunes. 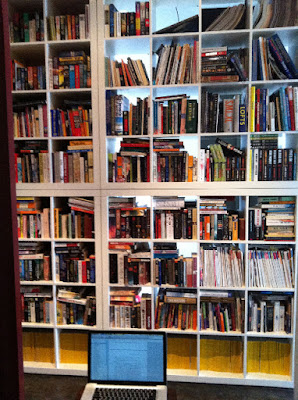 Do you transform your space in any way for each book? Do you ‘get into character’ at all?
I reorganise my office space when starting each new project, and by the end it’s full of research notes, books, and unopened mail. I’ve written five adult thrillers and the 2nd and 3rd I did get into character and realised for the sake of my sanity and those around me it wasn’t worth it. 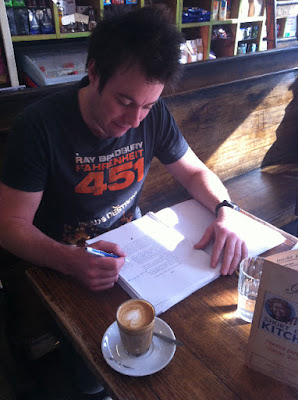 How has the place that you write evolved or changed since you first began writing novels?
My first novel I wrote at my parent’s house, which is on the southern coast of Victoria. I’d moved out after high school, aged 17, to study architecture at RMIT. After a couple years I deferred a year to see if I could write the novel that’d been bugging me to be written, so I moved back home for the year. I managed to complete it (FOX HUNT) and enjoyed the process so much that I ditched architecture to focus on writing. The 2nd book was written in a rented apartment in the eastern ‘burbs of Melbourne, an old terrace above a persian rug shop, where I had a windowless study. From book 3 to 10 novels later, the space has been the same: my study, in Richmond, in a space that I designed and built myself as a warehouse conversion.

Do you keep regular writing hours? What are they? If not, when do you write?
My first 2 novels I had a day job at a newspaper and then university, so my writing was mostly done at night and weekends. The last five or so years it’s been full-time novel writing, and I write in the morning and day, and only into the late night when deadlines approach (or pass by).

Being a young, full-time writer probably seems like a romantic existence, and I guess on some levels it is, but it’s all about being disciplined. The curse is that you can’t escape it – I write every day, because I cannot find the off switch. That means each day I have to trawl the depths of human experience and emotion, which can be wearisome and worrying. Yet to me it seems like the only way to live. Each moment I write I just want to get it right; I’m always trying to be accurate, to not cheat readers nor my characters. 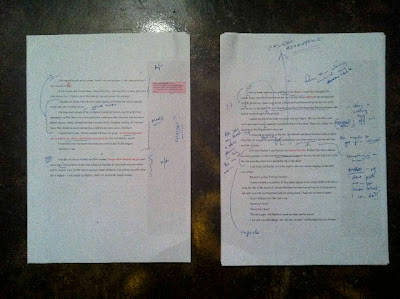 Do you have a morning ritual? Roald Dahl was said to sharpen pencils. What settles your mind for writing?
I start each day over a couple coffees at a local cafe, reading through the previous day’s work and then getting into typing the new stuff.

Is that Dahl comment a euphemism? As a kid I enjoyed his books yet I’ve rarely heard nice things said or written about him as a person – not that it’s a big deal, for most of us writers can be prickly, but from what I’ve read and heard it seems he wasn’t much fun. See this: http://boingboing.net/2011/06/07/roald-dahl-kind-of-a.html

What settles my mind? Unfortunately, very little. Music helps with blanketing out the background clatter. Writing a good book feels like a good achievement, if only until page one is started on the next thing. Perhaps most settling are the two or three little moments of literary magic that seem to occur each day – when you write, and really put the effort in to get lost in the characters and story, connections are made and moments arise that are completely unforeseen and unknowable for the author. That’s a fulfilling and settling, feeling; each day, after those moments, I feel some work of worth has been done.