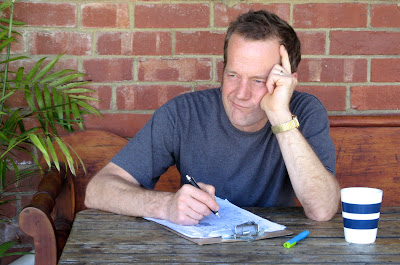 Greg Holfeld is an illustrator, comic creator, animator… basically anything with ‘-ator’ at the end. Apart from ‘elevator’. He’s obviously not an ‘elevator’. Or an ‘aligator’. He’s human, but he does draw animals exceptionally well. Greg shows talent across a broad array of mediums from his illustration work on the wonderful Captain Congo series (written by Ruth Starke) to his comics, advertising and award-winning short films (see Sumo Lake below). Let’s take a look inside his writing space and creative process…

Where did you create your latest book?
Not in this studio. We moved here early this year and Captain Congo and the Klondike Gold was drawn in the garden shed in our old house. New studio is a room at the front of the new house, and though it is cleaner, brighter and has significantly less spiders and mice, I’ve only just stopped missing the old place. Maybe because I’ve finally got this place messy enough. Sometimes my studio is nice and tidy. Or it looks like this. Don’t show my mother these pictures.

How important to you is the space in which you write?
I’m considered an illustrator rather than an author, but when I’m not drawing I’m figuring out what to draw which I guess amounts to writing. Certainly that’s true for any of the comics I write myself. I always conceive the images and the text simultaneously.
The space for “drawing” is pretty specific – it has to be in my studio with all my tools and resources. For “figuring out what to draw” it’s best if I’m away from all that otherwise I get distracted or find excuses to avoid something I find much harder than drawing. I keep the tools for this simple – paper, pencil, clipboard – and go somewhere far from my computer, comic book collection, etc. Perhaps a cafe, or a sunny picnic table in the back garden. The last thing I wrote was actually in front of the telly during a bad movie one night. You would think that would be distracting, but all the family were in bed, I was out of my studio, and the movie didn’t really warrant much attention (the Dawn of the Dead remake, if you’re interested – not recommended unless you happen to be writing a zombie short story and want examples of every cliché to avoid). 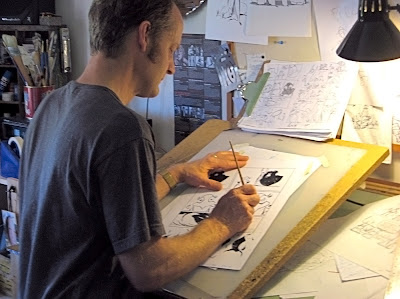 Do you transform your space in any way for each book? Do you ‘get into character’ at all?
The pin-board gets covered with reference and the tables get covered with relevant books. The greatest mess in my studio occurs at the point of maximum involvement in a project (clearly I’ve been pretty pre-occupied lately).
While my physique is hardly that of a gorilla or penguin, I often use myself for a model, so I will most definitely be pulling faces and poses in the mirror to match the character I’m trying to get down on paper. When I’m doing an animation project it goes even further and I’ll often act out a piece of action before I draw it. I’m glad I work alone.

How has the place that you create evolved or changed since you first began writing novels?
This new studio has room for what a friend called “the thinking space” – and I bet you thought it was just a comfy couch for reading and napping!

Do you keep regular writing hours? What are they? If not, when do you write?
I start work the minute the family is out the door around 8:15. I then go as hard as I can until about 3:30 – 4:00 when everyone starts coming back. What follows is a couple of hours where I’m too busy helping with homework and being the family IT expert and chief cook to get much drawing done. On a good day, this is when I’ll go for a swim or a bike ride. In the evening I’ll head back into the studio and see if I can manage to get to the stuff that I missed during the day. That’s usually the time for e-mails, bookkeeping, or doing whatever it takes to meet a hard deadline. With a family, I can’t work late like I used to. I have to get up with everyone else and a late night just means a tired, useless morning afterwards, so it’s not worth it.

Do you have a morning ritual? Roald Dahl was said to sharpen pencils. What settles your mind for writing?
Other than taking a moment to enjoy the sudden quiet of the house and seeing if my wife has left any coffee, I just go straight into the studio. If I knew what settled my mind and got me focused on creative work, I’d put it in a jar and spread it on my toast every morning. Instead I just sit down and hope for the best. Sharpening pencils happens all day long.

If you have time, watch Greg’s stunning short film Sumo Lake which has had around 150,000 plays on Vimeo.