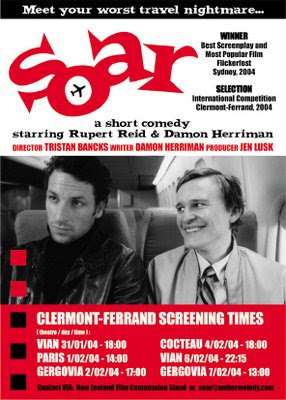 Soar, a short film that I directed has hit the web for the first time on Flickerfest at SMH TV, The Sydney Morning Herald’s new TV channel. Soar has won a bunch of awards at international film fests (list below) and has screened widely on TV, including Qantas Inflight and the US Sundance Channel.

The film was written by Damon Herriman and stars Herriman (J. Edgar, Love My Way, Breaking Bad) and Rupert Reid (Matrix 2 and 3).

I hope you get a chance to watch and rate it. NB: unlike my books, Soar was not specifically made for children. It has some strong language but, other than that, is fine for all ages.

More info on the film below. All pics by Kuji Jenkins

Soar is a short film about everybody’s worst travel nightmare – getting stuck next to an obnoxious dork on a plane where there are no spare seats.

Soar was shot on Fox Studios Australia’s 747 plane set, which was built for Mission Impossible 2. Fox were highly supportive of the production. Soar was originally a hit play at Sydney’s Old Fitzroy Hotel and at the Adelaide Festival and was subsequently turned into an ABC radio-play. 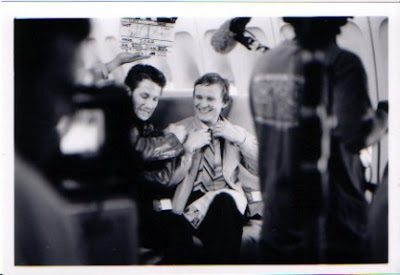 ‘The best production is the least production. “Production value” is code for forsaking the story’ – David Mamet

One set. Two actors. Two digital cameras. Few lighting setups. Minimal crew. Maximum spontaneity. This was the brief for the production of Soar, an example of how digital technology can be used to capture immediacy in a screen comedy in a way that a single-camera film shoot never could.

Our approach was entirely actor-oriented. So many times on a shoot, performances are relegated to low-priority because technical elements are impacting on the creation of the scene. Here we had a very clever comedy script, proven in a live medium and we needed to create a shooting style and mood on set that would allow the actors to feel as impulsive and free as they would be on a stage.

Two digital cameras running simultaneously allowed us to cut between the characters’ reactions on the same take without the actors being concerned with overlaps which can be the death of good comedic dialogue. We ran the script from start to finish four times on the day of the shoot, only stopping to repeat a scene if there was a major problem with what we’d shot. This way the actors built a sense of where their character was at in terms of the overall story as opposed to getting bogged down in any particular scene.

I was looking for spontaneity in approach both in front of and behind the camera and the hand-held Canon XL-1s allowed us to do that. There is only very minimal camera movement but the hand-held does give an observational feel, which furthers the sense that we are watching a ‘real’ conversation as opposed to a comedy where the jokes are ‘flagged’ and forewarned by the shotflow and shooting style.