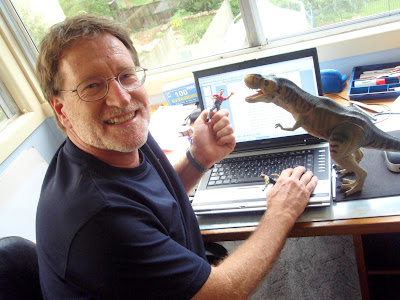 There are several very interesting things you should know about Michael Gerard Bauer.

1. He is not only a highly respected author, he’s also a very nice man.

2. His books for kids and teens have been translated into Dutch, German, Italian, French, Korean, Norwegian, Czechoslovakian and Hebrew.

3. He is a grown man (with a beard) and still plays with Batman, Buzz Lightyear and Homer Simpson toys.

There are, of course, other interesting things about Mr Bauer. A number of those are revealed in the following interview and pictures in which he invites us inside his creative spaces. 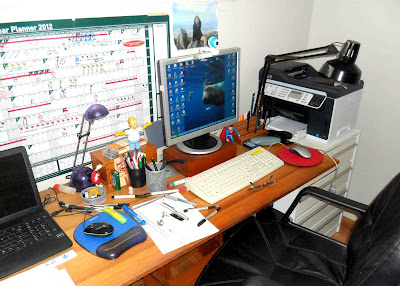 Where did you write your latest book? How important to you is the space in which you write?
I wrote my latest book Ishmael and the Hoops of Steel at home alternating between a study we have upstairs (image above) and a small computer nook downstairs (image below). For me the important thing about the space in which I write is that it needs to be quiet, away from people and free from distractions. I can’t even write with music. I tend to do all my writing when I’m at home. Rarely, if ever, do I write in places like hotel rooms or cafes or libraries or planes or while trekking through the Siberian tundra. Although I’d like to because it sounds rather romantic. 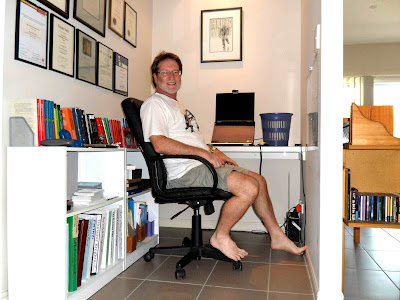 Do you transform your space in any way for each book? Do you ‘get into character’ at all?
Transform my writing space? Absolutely! I push all the rubbish and food scraps into the bin so I can see the keyboard. Sometimes I go the whole hog and don’t stop till I can see the entire desk top as well! As for getting into character, I don’t dress up at all if that’s what you mean. But I do try to get into my characters’ minds so I can see the world from their perspective. And I often read dialogue out loud so I guess sometimes I act out the characters as well. 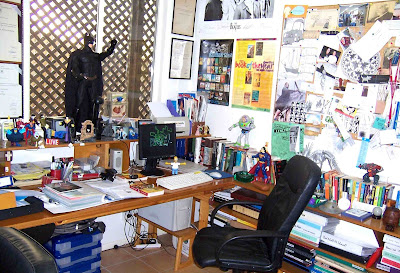 How has the place that you write evolved or changed since you first began writing novels?
We moved house a few years back, so my first book The Running Man and next couple were written at our previous home. Back there we had a fabulous large study area with desk space and shelves all built in by my wife’s father Ben (image above). You can see by the photo that if you want to be a writer you need a bare desk to work on, with no distractions around you. There was also a small room upstairs that the previous owners used as a nursery. It looked over the backyard. I wrote most of my novel Dinosaur Knights there (image at top). So no, the writing spaces haven’t really ‘evolved’ much, they’ve just changed out of necessity. I’m hoping one day that my writing spacewill evolve however – into a cabin overlooking the mountains around Maleny would be nice!

Do you keep regular writing hours? If not, when do you write?
I’ve tried to become more regular. (I’m talking about my writing here, ok?) But it’s tricky sometimes balancing school visits, talks and Festivals with time for writing. If I’m in the middle of a project my writing time does becomes more consistent and organised. I mostly write in the morning and through to the afternoon, but not often at night. I watch too many Reality TV programs!

Do you have a morning ritual? Roald Dahl was said to sharpen pencils. What settles your mind for writing?
You mean besides rolling out of bed, groaning and listening to my joints cracking? Well apart from that, the one thing I really find helpful for my writing is an early morning walk. Depending on the season I like to get up at around 6 am and go for an hour’s walk. Walking helps me sort things out in my mind. I see things more clearly when I walk and it’s when I often come up with story ideas and plot developments. For example the novel Just A Dog started because the name ‘Mr Mosely’ came to me while I was walking. I don’t know where that name came from, but I thought, “That would be a cool name for a dog.” Up until that point I had no intention of writing a dog story. After a walk, a shower and breakfast I feel primed to attack some writing. Another ritual used to be cups of coffee, but now I’ve given up coffee altogether. There’s no guarantee my will power will hold when the weather gets colder.

In coming weeks children’s / YA authors Christine Harris, Nicki Greenberg, Jack Heath, Paul Collins, Sherryl Clark, Chris Morphew and others will be in The Writer’s Studio.