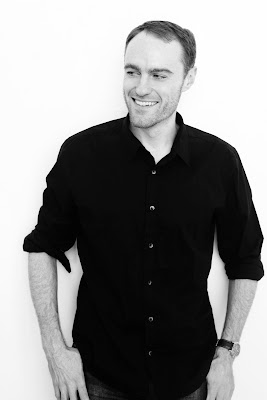 LA children’s author James Riley (Half Upon a Time and the brand new sequel, Twice Upon a Time) says that he was voted most likely never to write a book in high school. Here, he shares his writing space and talks botany, card tricks, day jobs and the ancient art of (dis) organisation.

Where did you write your latest book? How important to you is the space in which you write?
I write everything in the same place, which is wherever my laptop is. But given that my laptop is usually on my desk (see the horribly messy photo), that’s my go-to spot.

I’m not exactly one for organization in my space, as you can guess. But I’ll be honest, I’m not really writing in the physical space anyway … I’m entirely in my head, when it’s going well, imagining the writing as it goes. When it’s not going well, I’m in a place with a lot of fire and tiny little devils with pitchforks. By which I mean Los Angeles. 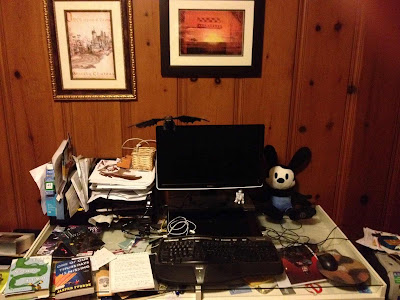 Do you transform your space in any way for each book? Do you ‘get into character’ at all?
My space gets transformed by my life, since my desk is where I drop … everything. Whatever happens to be going on at the moment ends up living for far too long in that spot, so to transform it book by book would involve transforming my whole life. Instead, I let my life transform the book, or something else that sounds very deep and philosophical.

How has the place that you write evolved or changed since you first began writing books?
A lot more copyedits from my editor, for one. For another … I’m not sure it has. I just can’t take myself seriously enough to create any kind of specific writer’s desk, made from timbers of the steamboat Mark Twain worked on. THAT, I use for a dining room table.

Basically, my space evolves as needed, meaning if I’m writing and something gets in my way, off it goes. Or if I need a book for reference, I grab it, leave it on my desk, and notice it weeks later, wondering what possible use I could have for 18th Century Antarctic Botany. Quite the page-turner, by the way.

Do you keep regular writing hours? If not, when do you write?
Usually around 9-10PM, what I call “The Magic Hour,” because I also do card tricks. Pick a card! Is it … the Eight of Spades? No? I can keep trying … 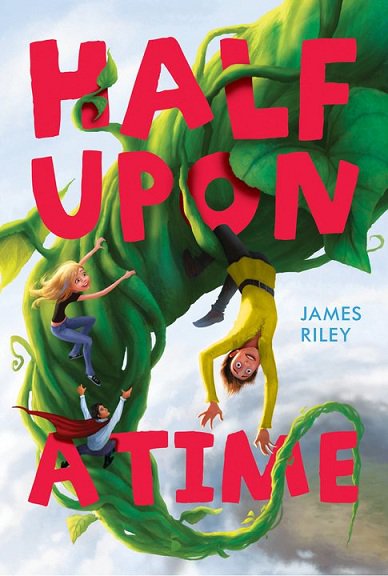 Do you have a morning ritual? Roald Dahl was said to sharpen pencils. What settles your mind for writing?
My morning ritual involves a day job, unfortunately. Also, showering, because people like good hygiene. But I’m going to start sharpening giant peaches in Roald Dahl’s name from now on, since I already have the “James” part covered!

As for settling my mind … I’m not sure I would even know where to start. That’s how I hear my characters … and the other, less beneficial voices. Those usually come in through what I call a phone, and for some reason, they never tell me what they’re thinking in third person. They’re selfish that way.

Thanks James. Next week, legendary children’s author Sherryl Clark will be in The Writer’s Studio.