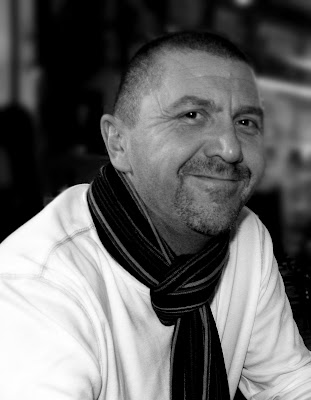 Martin Chatterton is an accomplished children’s author, designer and illustrator. His books are published in the USA, China, Finland, Canada, Australia and Spain. Chatterton’s amusing bio states that ‘in 2008 his book The Brain Finds A Leg was shortlisted for the NSW Premier’s Literary Award which, sadly for him and Australia, he failed to win. On the plus side, Morris Iemma lost his job soon after. Shockingly Chatterton also failed to win the Salford Children’s Book Award (2005), the Angus Book Award (2006), and has never been awarded the Astrid Lindgren prize. He is however the current holder of the prestigious Bangalow Sixes Golden Boot.’ Here, peek inside his writing space.

Where did you write your latest book?
I have just completed two books for Random House; one called ‘Mort’ which is a gothic comedy thriller about a 10,000 year old boy (and which I also illustrated) and one called ‘Helter Skelter’ which is my debut crime novel and isn’t funny in any way. Both books were written here – mostly – in Lennox Head sitting at the same computer I’m writing this on. My office/studio looks out onto my garden and is a quiet relaxed space.

How important to you is the space in which you write?
I’ve written everywhere – in hotels, on planes, on the beach – but being in the calm surroundings of my own studio is where I work best. It’s not so much the physical details as having a calm, cool place to concentrate. The hardest thing is when the house is busy (which is quite often). Usually it’s just me and the dog sitting in silence all day. I’ve been working for twenty five years and always feel that there’s this ‘perfect’ studio I should have out there somewhere! Sometimes I’ve been at other writer’s or illustrators places and been green with envy at how funky, cool or desirable their working environments are; Laurence Anholt’s in Lyme Regis is particularly wonderful! As I typed that last sentence the arm fell off my chair…no kidding, I need a new one. 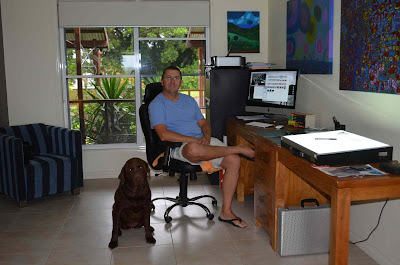 Do you transform your space in any way for each book?
No, not really. As I’m an illustrator and graphic designer as well as an author, I often have a number of projects on the go at any one time. The only transformation is switching from the keyboard to the drawing table or lightbox. Quite often the three disciplines overlap and I write, illustrate and design the whole book, switching across from one aspect of the project to another.

Do you ‘get into character’ at all?
On a really good streak, and when I’m really into the story, I find that the characters start helping me out. By this I mean that I am so close to them that I start to think a little like they do. I think writing is a little bit like acting in that way – not that I’m an actor. 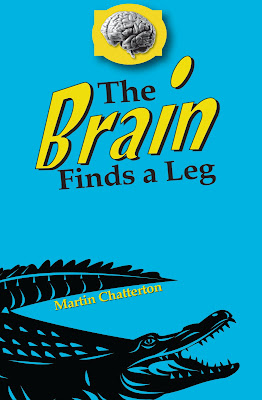 How has the place that you write evolved or changed since you first began writing novels?
The essential elements haven’t changed much. I still use a computer (I’m not old enough to have ever used a typewriter or even a word-processor), still have a dog lying around the place, still like to have silence when I’m writing – music or radio when I’m drawing.

Do you keep regular writing hours? If not, when do you write?
I’ve always been a freelancer so have evolved a certain amount of discipline about the hours. I try to clock on around 9 and off around 5 to pretend I have a proper job. Obviously this oscillates wildly depending on the project and the proximity of the deadline. At the moment I probably have too many spinning plates so I’m working longer hours.

Do you have a morning ritual? Roald Dahl was said to sharpen pencils. What settles your mind for writing?
I tend, like many writers, to have a whole series of prevarication techniques before I start. This includes, but isn’t restricted to; answering emails, checking Facebook, reading the BBC football site, walking the dog, getting a coffee from the bakery, tidying my desk. Once all of these are done I can start for, oh, maybe an hour before finding I absolutely have to check on something else.

This Writer’s Studio post was first published in Northerly, the magazine of the Northern Rivers Writers’ Centre.