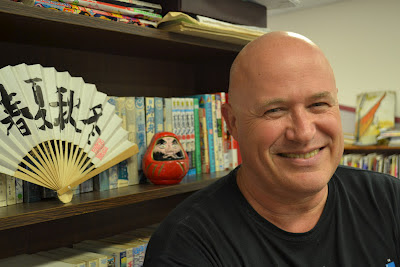 David Lovegrove is a Northern NSW-based illustrator and manga artist. He has created concept art for film and TV including Steven Spielberg’s World War II mini-series The Pacific. He runs popular manga workshops for kids and teens throughout Australia and is currently working on his own graphic novel, Daruma. Here, he takes us inside his creative space and process.

Where did you create your latest book / project? How important to you is the space in which you create?
My graphic novel Daruma has been created in a very diverse range of places – on a jet scribbling sudden inspirations on the back of a ‘sick bag’, in coffee shops on napkins, on trains and send from my iphone to myself, scribbled in sketches sitting in a temple garden in Japan. Somehow, the odder the place the better the ideas!

Do you transform your space in any way for each project? Do you ‘get into character’ at all?
My story is about ninjas and geishas and robots plus all sorts of other unconnected things. I have my “old Japan” space at home and my studio where I sit and collate and rewrite and sketch. I watch a LOT of Samurai movies, read lots of manga and listen to arcane Japanese music and I also practice kung fu so I am always ‘in character’.

How has the place that you create evolved or changed since you first began?
The Samurai DVD collection keeps growing, as does the Daruma doll and Japanese arcana collection. I write at the desk that I used as a teen that I inherited from my dear storytelling Nana.

Do you keep regular writing hours? If not, when do you write?
I tend to write whenever I get the chance, hence the sick bags and napkin approach – we have three young children so life is pretty hectic at home. My studio is my hideout but the kids give me energy. I write a lot late at night too.

Do you have a morning ritual? Roald Dahl was said to sharpen pencils. What settles your mind for writing?
Yoga and practicing Wing Chun kung fu (which is a relaxing internal style) and listening to traditional Indian and Japanese music are my ways to settle my mind. If I don’t do them the daily stresses of life can really throw me off track.


Thanks David! Next week, another writer / artist in The Writer’s Studio.

(This interview originally appeared in Northerly, the magazine of the Northern Rivers Writers Centre.)