It has been a big year for our free multimedia story brainstorming app Story Scrapbook with some major new updates based on user feedback.

The app has now been downloaded nearly 3000 times. I have also toured it around the country, helping kids and teens create stories using images, video, music and maps for inspiration. It has been amazing to see students come alive when creating their work, especially those who are usually reluctant creative writers or find it difficult to begin.

The three major updates based on feedback include…

1. Object Menu Update
There is now a direct link to Google Images in the Objects menu, placing all Objects in one place. Previously Google Images was accessed only via the Web menu.

2. Toolbar Updates
A Text tool has been added (‘T’ in image below) for adding text to objects. This includes Letters, Sticky Notes and Text blobs.

Coloured markers are now thicker and smoother and the eraser is now much more effective. We have also added a lead pencil marker.

3. Coloured Backgrounds
Sticky Notes and Letter objects can now be used in an array of colours. Previously they were only ‘Sticky Note yellow’ and plain white. 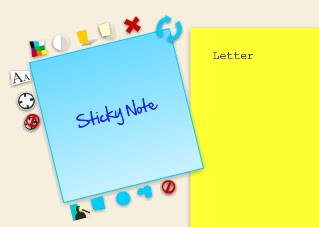 Big thanks to Ben Train, the super-smart programmer and designer behind Story Scrapbook. And thanks to everyone for the interaction and ideas on the Story Scrapbook page and at events. Looking forward to a big 2014, continuing to revolutionise this tool and bring the creative process alive for kids and educators.