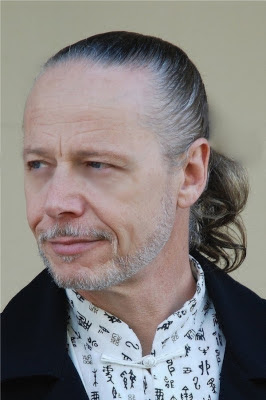 Simon Higgins is an ex-police officer and private investigator turned Children’s and Young Adult author. He shares his love of martial arts with kids around the world through his extraordinary characters and dynamic live presentations. He is the 50th author or illustrator in The Writer’s Studio. Read on to discover how and where this passionate man creates.

Where do you create?
Lots of different places! I like to use a laptop with a long life battery and work in ever-changing locations: on the veranda at home, out in the garden, when I’m on a plane, even when I’m overseas -which is usually somewhere in Asia – amid stimulating energy and sights. I’ve had the honour of travelling, researching and either training or competing in martial arts in both China and Japan. Hence my last book, Moonshadow: The Twilight War, was about the world of the shinobi, or ninja, many of whom that we know about from history were teenagers. Being so interested in other cultures, I’ve had to learn to create on the move.

How important to you is the space in which you create?
When I first started writing professionally in 1998, a designated space was very important but, over the years, I have learned to take a certain head-space with me everywhere I go. Traditional martial arts has gradually taught me how to focus and concentrate, and how to either take everything around you in when you need to be alert, or to shut virtually everything out when necessary, which is ideal for writing.

Do you transform your space in any way for each project?
After studying my research material, notes, photographs and so on, I make myself comfortable in a chair, or kneel in the traditional Japanese seating pose called Seiza (back straight, legs folded, sitting on your heels on the floor) then set up my laptop on some stable surface so I can touch type quickly without it rocking. Then I get in the zone mentally, often with some slow breathing, and away I go. 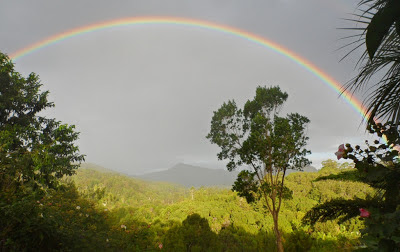 How has the place that you write evolved or changed since you first began illustrating and writing books?
My writing locations have included hotels, aircraft, trains, railway stations, temple gardens, high-rise buildings in Chinese cities and, of course, my own rather large ‘back yard’. I am privileged to live in Northern New South Wales near the mountain named Wollumbin (‘the cloud catcher’) by its traditional owners, so I find that, weather permitting, outdoors is a beautiful and calming place to create. The photograph you see that includes a rainbow is actually a view from my veranda, taken during a coffee break from writing. I grew up in a city, and now, I feel deeply grateful to live among such beauty.

What time of day are you most creative?
I tend to write in long bursts that can happen at any time of the day or evening. Mid afternoon and sometimes late at night I can really break into some fast streaks, getting a lot of stuff down quite quickly. 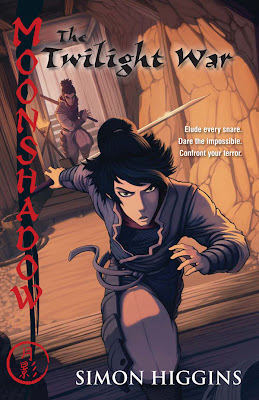 Do you have a morning ritual? Roald Dahl was said to sharpen pencils. What settles your mind for illustrating and writing?
I often still my mind using martial art forms (or kata, as some call them) which are a kind of moving meditation, not unlike Tai Chi. I learned to use a samurai sword in Japan, and also to throw real ninja shuriken (iron circular throwing stars) so I could write the Tomodachi and Moonshadow books respectfully – and accurately. Doing an unarmed kung fu or sword form really readies my mind for work, but I hasten to add, I don’t play with shuriken in Australia. It’s legal in Japan, but not in Oz, so I didn’t try to bring any home with me. Besides, where I live, sudden attack by ninja seems unlikely. 🙂 I have, however, been suddenly confronted, while writing, by brush turkeys, goannas, wallabies, two eagles, and the odd very long, scarily thick python. Lucky I love animals and know how to stay very still. 🙂

This piece first appeared in Northerly, the magazine of the Northern Rivers Writer’s Centre.