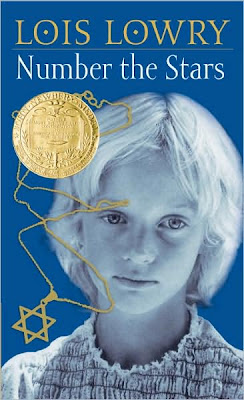 Here is a guest-post review by my nine-year-old son of Lois Lowry’s Newbery-winning Number the Stars. He was pretty impressed by it.

Number the Stars is about Copenhagen in the 1940s during the German occupation of Denmark. At that time Denmark had a king called Christian X. When he saw the Germans coming he ordered his navy to be destroyed for Denmark only had a small army and it was useless to resist the Germans.

Ten-year-old Annemarie Johansen is thrown into a dangerous world when her family gets involved in smuggling Jews out of Denmark over to Switzerland in fishing boats.

My favourite character is Annemarie’s uncle Henrik. He is funny and smart but sometimes stubborn.

My favourite part is when Annemarie has to run to her uncle’s boat to give him a package but is stopped by a German patrol in the forest. When they stop her they ask what is in the package and she says she does not know. They snatch the package off her and open it.

I give Number the Stars five out of five.