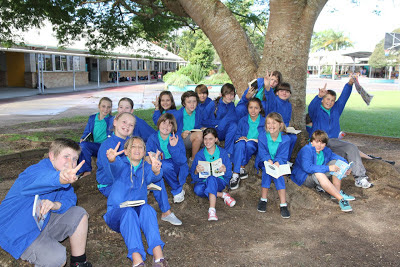 Kids are a powerful force in changing the world for the better. This year I’m working with Room to Read and children across Australia to raise $25,000 to publish a local-language book for children in Tanzania, Africa.

Help us by performing one of these simple, fun fundraising actions this Children’s Book Week…

1.
Embarrass your teacher! Eight teachers as well as the Principal at Channahon Junior High School in
the US agreed to dress up in embarrassing costumes if US$1,000 could be raised
through their fundraising efforts for Room to Read. Through this event, a
raffle, and other activities, they raised US$3,900!

2. Drop Everything and Read

Get sponsored to drop everything and read for an entire hour. We did it in the video for last year’s World Change Challenge:

Twelve
high school students from Lakeside School in Seattle held an auction. They
volunteered to be part of a campaign called Literacy One and had
record-breaking results–they raised $650,000! Joanna Schott, one of the
students said, ‘It’s sort of surprising. People were really energised by a
group of young kids getting involved in a worthwhile cause.’

In Universities in
Canada, students camped out for a week in the library. They slept, ate, brushed their teeth etc. in the library and got people to
sponsor them.

5. Sponsored Silence This idea
featured in John Wood’s book, Leaving
Microsoft to Change the World, where parents pay $10 to buy an hour of
silence from their children. Any parent knows that this represents extraordinary value.