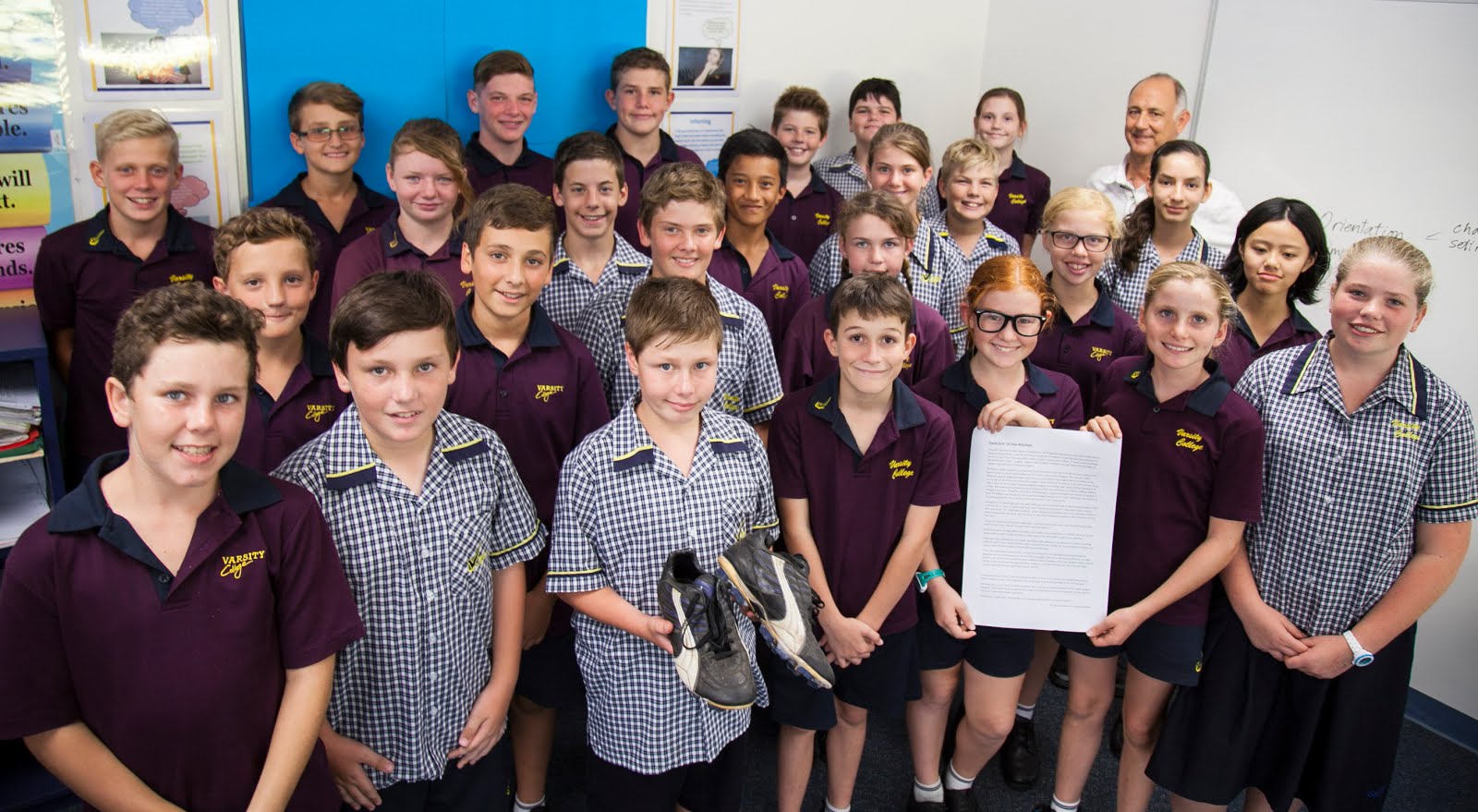 I recently visited Varsity College on Queensland’s Gold Coast. It was a fantastic day and the students in teacher Mark Buzolic’s class, 7I, had written a collaborative story in the style of the My Life books, using this food-based story starter and the story ‘Hot Dog Eat’ from My Life & Other Stuff I Made Up for inspiration.

I loved the story so much that I wanted to share it with you. (Beware of the ‘groaner’ joke at end!) I’m going to develop a kids’ content section on my website so leave a comment or send me an email if you have a funny / weird / gross or thrilling story to share.

Switchin’ in the Kitchen

Without a doubt, lasagne is my favourite food. Normally I could eat it for dinner every night of the week and every lunch and breakfast for that matter. But not this lasagne. This was my sister’s infamous special spaghetti lasagne and I’d have to say there is no lasagne like it anywhere in the world. Not in all of Italy and not in the dodgiest Italian restaurant known to man. Let’s just say, if you took a bite out of my sister’s special spaghetti lasagne on Monday, you would still be chewing it on Friday. Normally cooking makes any kind of pasta softer, but somehow my sister’s cooking makes it tougher than year 10 algebra. And there were strands of spaghetti between the sheets of lasagne. It took the Italians two thousand years to perfect lasagne pasta and my sister thinks she can improve it by adding spaghetti. Not only that, there were olives. I can’t stand olives.

Staring into my sports bag, into the open shoe box, my mind raced back to the morning’s events – the morning of my under 13 soccer cup final. Sure I’d packed my entire kit – shin pads, socks, shorts, shirt and boots. Yes – definitely the boots. Laced, cleaned and polished. My sister had been nowhere near it because she was busy with her entry in the year 9 cooking competition. But what was it Mum had said?

‘Leave your boots on the kitchen table dear. You know your father and I can’t be with you for the match so the least I can do is to give them one more polish.’

And that must have been when the switch was made. It must have been a mistake. My mum would never mean to spoil my big day and my sister was surely too stupid to plan such a disaster.

Now here I was, standing in my thongs, staring dumbfounded at a container of my sister’s cooking while my team mates pulled up their socks and laced up their boots. No time to phone for help, not a spare pair of boots in sight and kick-off only seconds away.

Then I did something no sane person would even attempt to do. I grabbed two long strands of spaghetti and started strapping on those slices of lasagne, first to my left foot and then to my right. Maybe, just maybe, from a distance those leathery slabs of lasagne with a few random olives sticking out like studs, would look enough like boots to get me onto the field! But as I ran out there, I could already feel my plan starting to come unstuck.

That night, around the dinner table, I proudly retold the story of how, as my ‘boots’ unravelled into a gooey mess of cheesy sauce, I’d accidentally slid into the goal mouth and knocked in the winning goal.

Not only that, but my sister proudly produced two cooking competition medals for her boot-shaped ‘lasagne’. Who would have thought? Most original presentation and most improved!

By Mark Buzolic & 7I, Varsity College

Mark’s comments on the way the story was created:

‘It was a joint construction with the class, inspired by an activity idea on your website and following on from The Dog Eat story, namely composing a story involving your favourite food. I tried to involve students in the decision making process and get them to appreciate that a story is something created by an author who makes choices. I think sometimes that students believe the story is pre-determined and the author just writes it. Hence we shared decisions such as whether to give a commentary of the football match or to leave that out and cut to the aftermath. We also decided that the original title Pasta Boots gave away a big part of the plot.

I wrote most of it ‘live’ in class on the projected screen so kids could witness the changes, the editing and the thought processes and help out with the writing as much as possible to make it our class story.’