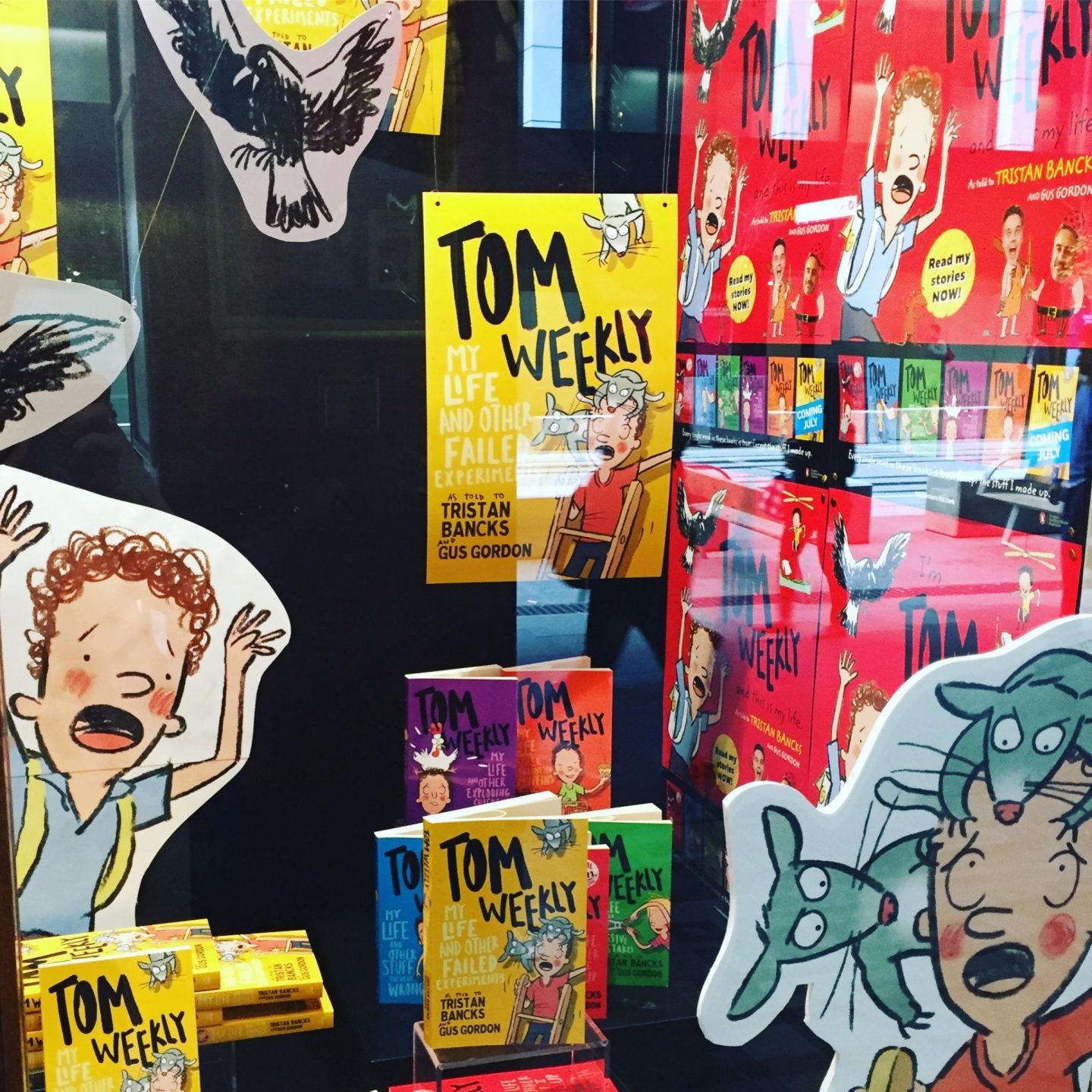 Here are the first reviews of Tom Weekly: My Life & Other Failed Experiments thanks to uber-librarians / book bloggers Sue Warren (aka Losang Zopa) and Kim Yeomans (Wild About Books). Hope you enjoy their insights into the book… (Above, Tom Weekly broke into Dymocks on George St, Sydney, my favourite bookshop as a kid. 😉

So my read last night was the new hilarious instalment in Tom Weekly’s adventures and it didn’t disappoint. Fortunately alone in my bedroom there’s no one to witness my snorts of laughter!

Where to start? Well I just loved Nanna Nancy’s stealthy attempted sabotage of the fruit cake competition and the skilful way in which she makes Tom her patsy for the crime. Then of course there’s the traumatic guinea pig hostage situation where the very image of Tanya ending up in a rubbish bin filled me with absolute joy – and of course Gus the guinea pig surviving triumphantly.

Skroop’s massive detention siege and the ultimate revenge of having bully Brent getting his come-uppance is pretty sweet as is getting the better of the world’s angriest ice-cream man. Tom’s smelly bottom issue and baby-sitting Jack’s horrid little brother Barney are both as funny as but without doubt, the pièce de résistance is the Killer Possums, for which I have been waiting with great anticipation.

My visual of a posse of possums in a conga line and Tom covered head to toe in possums made me laugh aloud and was indeed worth the wait.

As usual, interspersed with the chapters, is much useful Tom Weekly advice such as reasons to get your parents off social media and household hacks along with ‘Would you rather……’.

Again, Tristan has given us a prime motivator to get kids reading – and enjoying it – this is bound to be another sure-fire winner with the kids from around Year 3 upwards.

Woot! Keep on bringing it Tristan and Gus!

My Life and Other Failed Experiments is the sixth book in the series and it continues to make me laugh out loud! It is filled once again with funny short stories, lists and quizzes by Tristan Bancks and hilarious illustrations by Gus Gordon.I can only imagine the fun Tristan and Gus have creating the Tom Weekly books. What a dynamic duo!

Tom Weekly says his life is a science experiment gone horribly wrong so his new motto is ‘Never give up, never give in’. That’s a big challenge when your guinea pig is held hostage by your evil sister, you’re hit in the face by a fruitcake as hard as a brick, attacked by a posse of possums and you totally embarrass yourself in front of the girl of your dreams on Christmas Eve.

In Hostage, Tom’s sister Tanya holds his guinea pig Gus hostage and threatens to drop him out the window if Tom doesn’t hand over his birthday money – a whopping $180! With just eight seconds left can Tom save his beloved Gus and his birthday money from his evil, maniacal, psycho sister? Stop reading at page 11…What would you do?

The legendary feud between Tom and Jack’s Nans, Nancy and Sue continues inRazorblade Fruitcake when Nancy’s crown as the Fruitcake Queen is threatened when Sue enters the baking competition. Why does Tom believe his Nan when she tells him Sue has baked something dangerous in her fruit cake? Who wins the prize and the fight as fruitcakes go flying like frisbees?

Some people think possums are cute…Tom Weekly is not one of them! Thanks to Tom, in Attack of the Killer Possums, the Weekly’s roof has been invaded by possums and their noisy roof antics are turning his family into sleepless zombies. On top of the ladder at midnight, Tom tries to put the roof tile back in place only to discover…

There are ten or twelve possums staring at me from a tree. A posse of possums. I’m pretty sure one of them is picking his teeth with a long knife. One looks like it has only one eye. Another has tattoos on its pink hairless snout and bears its sharp teeth, growling in a low demonic hiss.

It’s Tom Weekly versus the possums…and it gets ugly!

I don’t think I will be looking at the Christmas lights in my neighbourhood in quite the same way after reading about Tom’s exploits in The Christmas Kiss. Tom’s mum asks him to dress up as Father Christmas on Christmas Eve and zoom down a zip line from their balcony to deliver candy canes and Christmas puddings to neighbourhood kids. Tom only agrees when  Sasha, the love of his life promises to give him a kiss. Eating a record twelve candy canes beforehand, combined with Tom snagging the Christmas tree lights on his way down, makes the Weekly’s Christmas Eve one that will be remembered in their neighbourhood for a long time. And one both Tom and poor Sasha will want to forget!

One of my favourite stories, Author Visit should be compulsory reading for authors! Gary Cleese (aka Barry Cheese thanks to Mr Skroop) is visiting Kings Bay Public school. Not even his ‘Reading is Fun’ t-shirt or Tom Weekly’s desperate attempts can save Gary Cleese from the 400 students ready to bring him down in ways he had never imagined with a barrage of questions that hijack his carefully planned author presentation.

Tristan continues to ask the hard questions with his quizzes What Would You Rather Do? and Who Would You Rather Be? For the record I would rather abseil down the side of a sky scraper than dive off a tall bridge and I’d rather be Wonder Woman than Lisa Simpson (although I’d really rather be Batgirl who was also a librarian!). I’m sure there will be lots of discussion with your friends about your choices and you could think up some of your own! You could try some of Tom Weekly’s Handy Hacks for Household Chores…your mum might not be impressed though!

After reading My Life and Other Failed Experiments check the back of the book to see all the schools and kids who have helped Tristan with his ideas during his author visits and writing workshops.

Tristan can make an author visit to your school and he can also do a Skype or Google Hangout visit. These are great Teacher Notes for the Tom Weekly series.