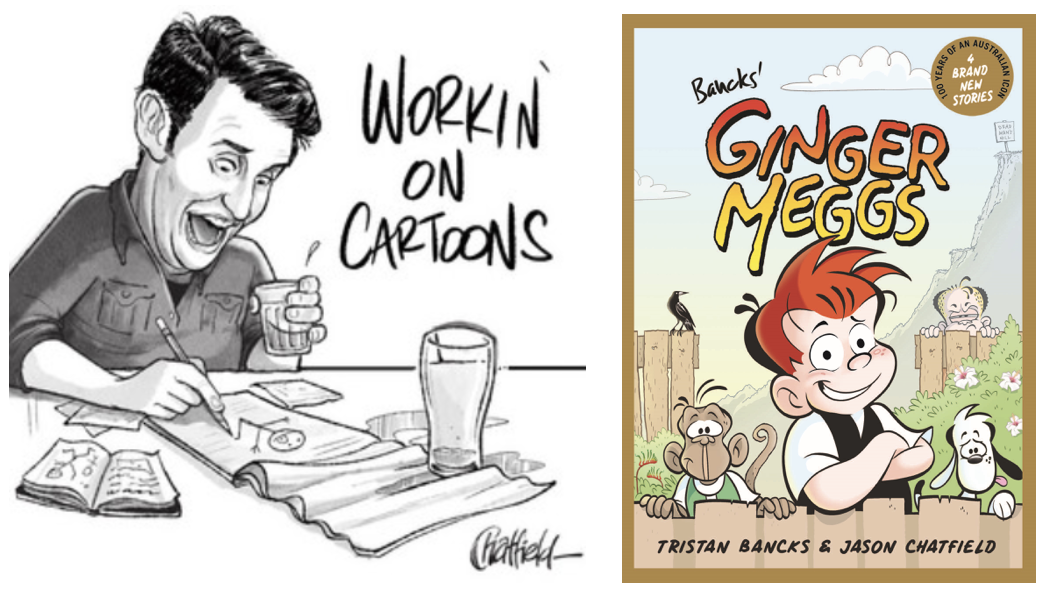 Music captures and dictates tone and emotion in stories. Every book I write has its own unique book soundtrack. You can listen to soundtracks for Two Wolves, The Fall, Detention and Tom Weekly online. This is the music that I listened to over the years that it took me to write each book. It’s the music that brought me back to the feeling I had when I was first excited by that story idea. Here, I want to introduce you to the Ginger Meggs book soundtrack

My soundtracks place me in just the right headspace for that story and allow me to transition from the real-life, waking world into that mysterious story space where characters speak and do unexpected things. For young writers working on their own stories, a story soundtrack can get the words moving quickly onto the page. (Covered in episode 14 of Young Writers’ StorySchool – Building a Book Soundtrack.)

On my latest book, Ginger Meggs, I needed to tap into 100 years of this character’s history. Jason Chatfield, the Ginger Meggs cartoonist and illustrator of the book, has been writing and drawing Ginger daily for newspapers around the world for nearly fourteen years. I needed to get as close to the way he feels when he’s creating the comic strip as I possibly could. So, I listened to what he listens to when he’s drawing Ginger Meggs – his ‘Workin’ on Cartoons’ Spotify playlist (below). It’s mostly jazz, no lyrics and it was the perfect mix of energy and emotion for me to slide down into a feelgood creative space to write this book.

Strangely, as well as listening to what Jason listens to when he’s writing Meggs, I, one day, inadvertently, wandered into the very same room in the New York Public Library that he writes the cartoon, sat down and worked on one of the stories in the book. There are more details of that in this post and in the video interview that Jason and I did for Better Reading.

So, for your listening pleasure, here is the ‘Workin’ on Cartoons’ Ginger Meggs book soundtrack. Have a listen or a flick through. I hope you find something you like. The opening track is a cracker and I particularly like track 5, too. Enjoy!

BOOK PUBLISHED 4 MAY 2021. ASK YOUR LOCAL BOOKSELLER OR BUY ONLINE VIA PENGUIN HERE.

NSW RESIDENTS CAN GET A PERSONALLY SIGNED BOOK THROUGH THE CHILDREN’S BOOKSHOP HERE.

For updates on the 100th anniversary book and celebrations, sign up for my monthly eNews.