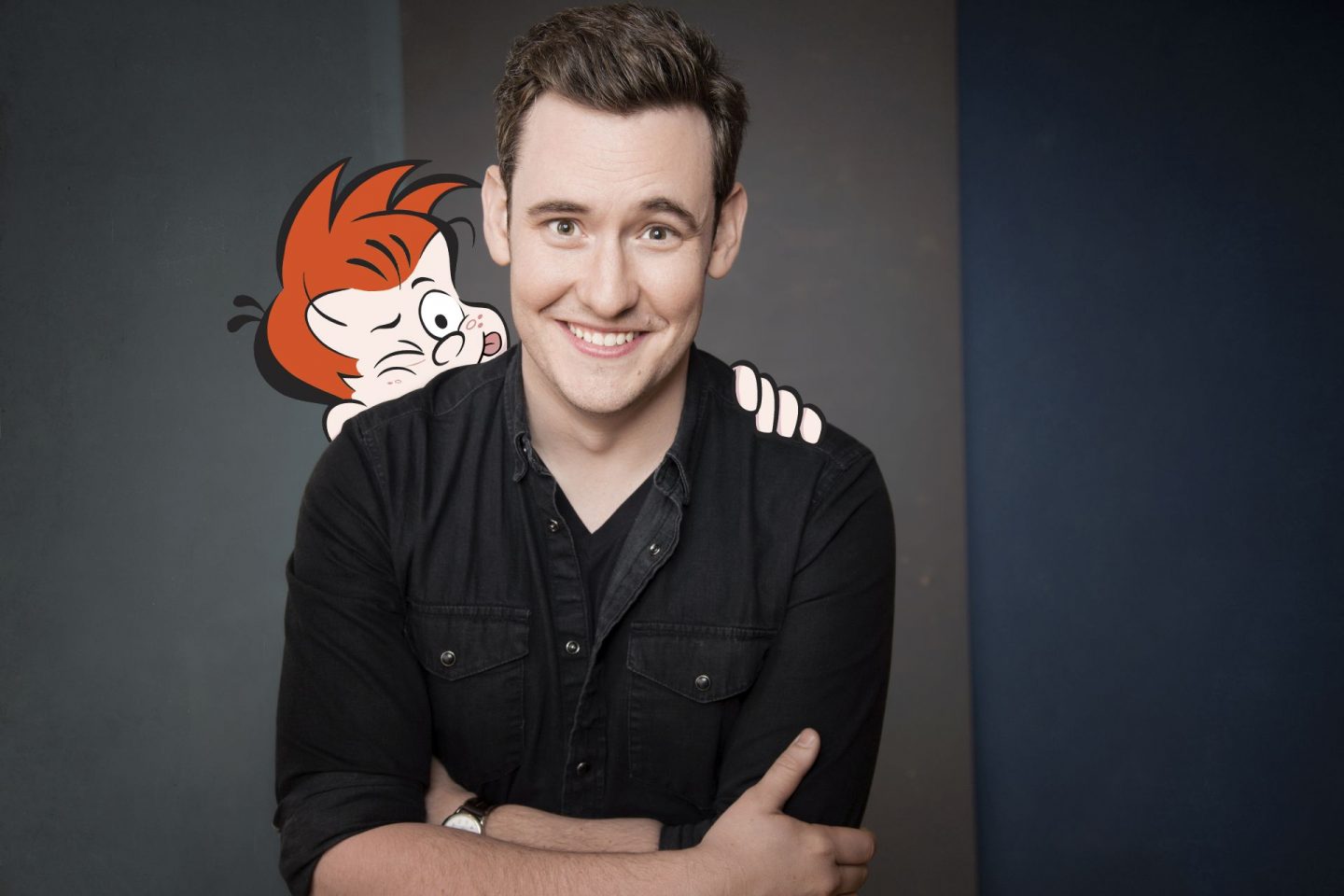 Jason Chatfield is the fifth artist to draw the famous Australian comic strip, Ginger Meggs, in its 100-year history. I was lucky enough to work with Jason on our Ginger Meggs book of brand new short stories to celebrate Ginger’s 100th anniversary. Jason’s an incredibly hard-working and multi-talented human, working as a standup comedian and TV presenter alongside cartooning for The New Yorker and drawing daily Ginger Meggs strip for newspapers all over the world, he’s also worked for my favourite mag as a kid, Mad Magazine.

Here, Jason Chatfield shares tips on writing comics, he tells where he finds inspiration and gives some behind-the-scenes stuff on the making of our new book.

How did you get the job as Ginger Meggs cartoonist?

I was asked by James Kemsley, the strip’s fourth cartoonist, to write and draw Ginger Meggs. I took on the job not long before Kemsley died. He was a dear friend and mentor. It was a very bittersweet way to inherit such a huge honour.

Did you have to practise how to draw the characters a certain way? Or did you bring your own illustration style to the strip?

I had to adhere to a set of strict illustration guidelines, which were sent to me by James Kemsley. His feeling was that if the strip changed too much too soon, the newspapers would receive complaint letters and editors would use it as an excuse to drop the strip from their paper. Interestingly enough, I read James Kemsley’s ‘How-to-draw cartoons’ books growing up, so I had already adopted many of his drawing techniques from a very young age. It was at least 10 years before I started introducing my own small stylistic changes to the strip.

How did it feel to hand over the writing of Ginger to me for this book?

If it were anyone else, I’d have been nervous about it. But knowing it was you at the reins, I didn’t think twice. Your knowledge of the Ginger Meggs characters and universe made you the perfect candidate to create these stories. I think we worked in a very easy, collaborative spirit.

With any newspaper comic strip, you only get a few seconds of the reader’s time to a) read the strip and b) ‘get’ the strip. And you only have 3-4 panels to accomplish this in! It takes a lot of practice to keep your word count and illustrations to the exact needs of the story or joke – it is a very restrictive art form. Creativity within constraints can be a wonderful challenge, but there really is nothing like being able to open your wings and explore a world of characters in depth. I really enjoyed the space on the page to be able to draw lots of fun details into the book illustrations; since the newspapers run the comic strip smaller every year, I can barely draw a fence and a bush in the background before the comic panel is overcrowded. As well as all the extra space to play visually and add more details, I got joy from knowing that the paper would be high quality, which means the illustration colours are really showcased. Newsprint paper is designed to be ephemeral (have a short life-span), so low quality inks and paper are used to print them. Getting to see Ginger printed in full colour on high-quality paper as a top-end hardback book was a real joy. 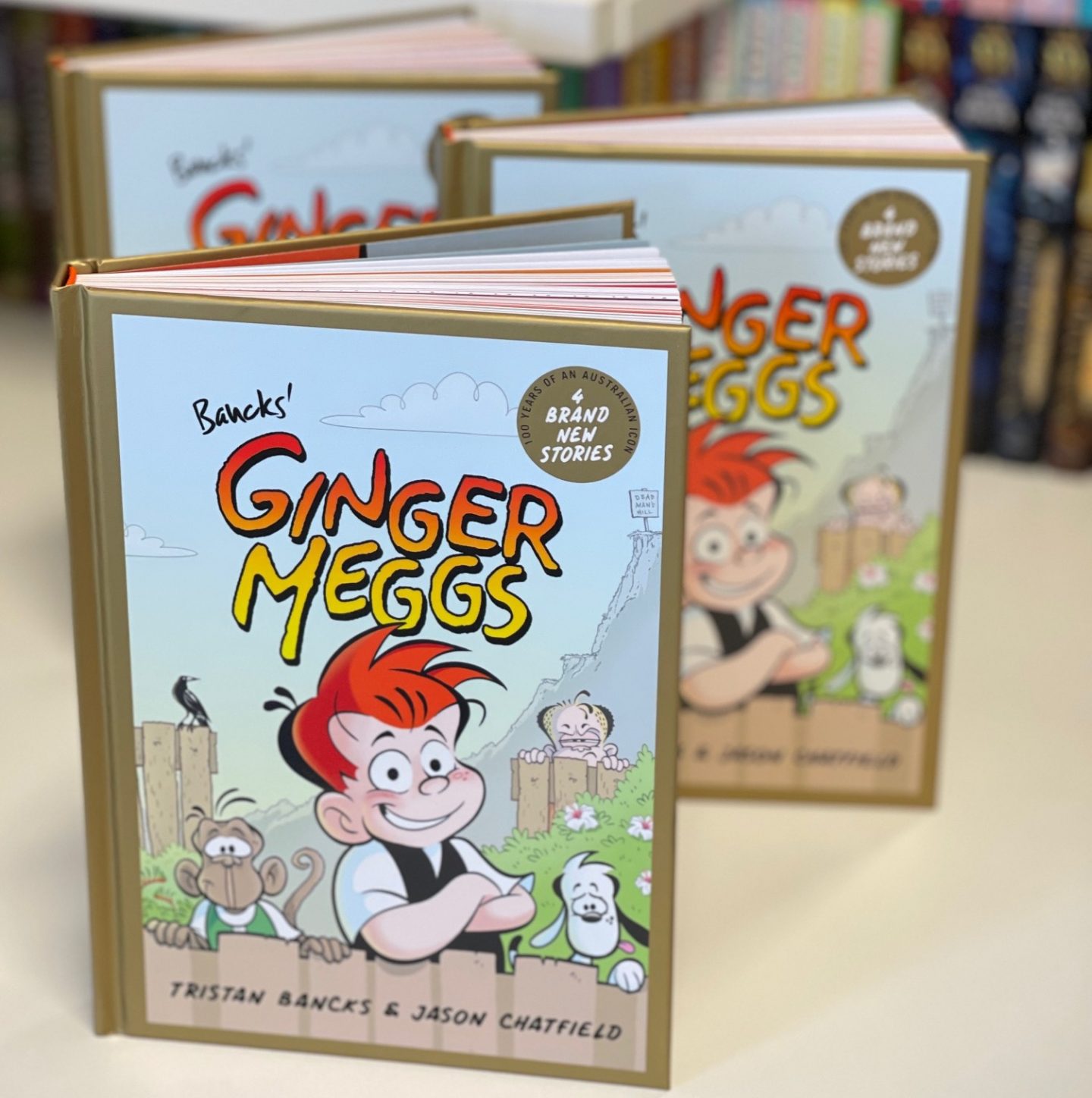 When you’re coming up with a new Ginger story for the strip, do you write the words first, or do you write and draw at the same time?

It’s sort of a strange combination of the two. Ideas come in odd forms, so sometimes a story or a joke comes first and I then need to think of a visual accompaniment to make it work. I sit and write many strips at a time, so that I can keep the tone of them consistent, and so that I can really get in the zone and immerse myself in the Ginger Meggs world. Other times, it’s neither words or pictures, but just a vague feeling I want to capture. I always write/draw by hand, as there is something very special that happens between the brain and the hand when I write, that is lost when I type on a laptop, tablet or phone.

Where does Jason Chatfield find inspiration? And how do you come up with story ideas for all the Ginger strips you create?

I tap into my own childhood for a large part of it. I was lucky to grow up in a cul-de-sac with lots of interesting characters as neighbours, and I’d be out playing, riding my bike and galavanting all over the neighbourhood because we couldn’t afford video-game consoles. I drew a lot as a kid, so I accidentally captured a lot of my younger brain on paper, which my mum kept in a big box in the wardrobe and unashamedly use as inspiration. There are small things here and there that I put in the strip that result in a text from my mum saying, “I wonder where you got this idea, hmmm?” (My mum is a bit like Ginger’s mum.)

Do you have a favourite character (other than Ginger) to write/draw in the strip?

Yes, I really like writing jokes for Penny and Fitzzy. They’re both real fish-out-of-water characters within the group of friends in Ginger’s world. Fitzzy is a bit of a geek (I can relate), and Penny is always trying to get through her day without someone asking her a silly question. She has a good sense of humour, so it’s funny to watch her and Fitzzy navigate (tolerate) the challenges they bump up against throughout their friendship journeys. Penny Chieng is named after a friend of mine, Ronny Chieng, who helped me develop her as an authentic Malaysian-Australian character. Ronny is a comedian by trade, so there is a little bit of his attitude in her humour.

What is your all-time favourite Ginger strip?

The one that means the most to me was the tribute strip to Ginger’s grandmother. In it, Ginger’s grandfather reminisces with Ginger about her while they’re fishing down at the creek. It wasn’t a particularly funny strip, but it got a lot of kind responses. My grandparents played a very large role in my upbringing, and the newspaper ran this strip on the one-year anniversary of my grandmother’s passing, and so my grandfather got to read it in the paper. He passed away a few years later.

You can read the first chapter, see the book trailer and discover more behind-the-scenes stuff here. 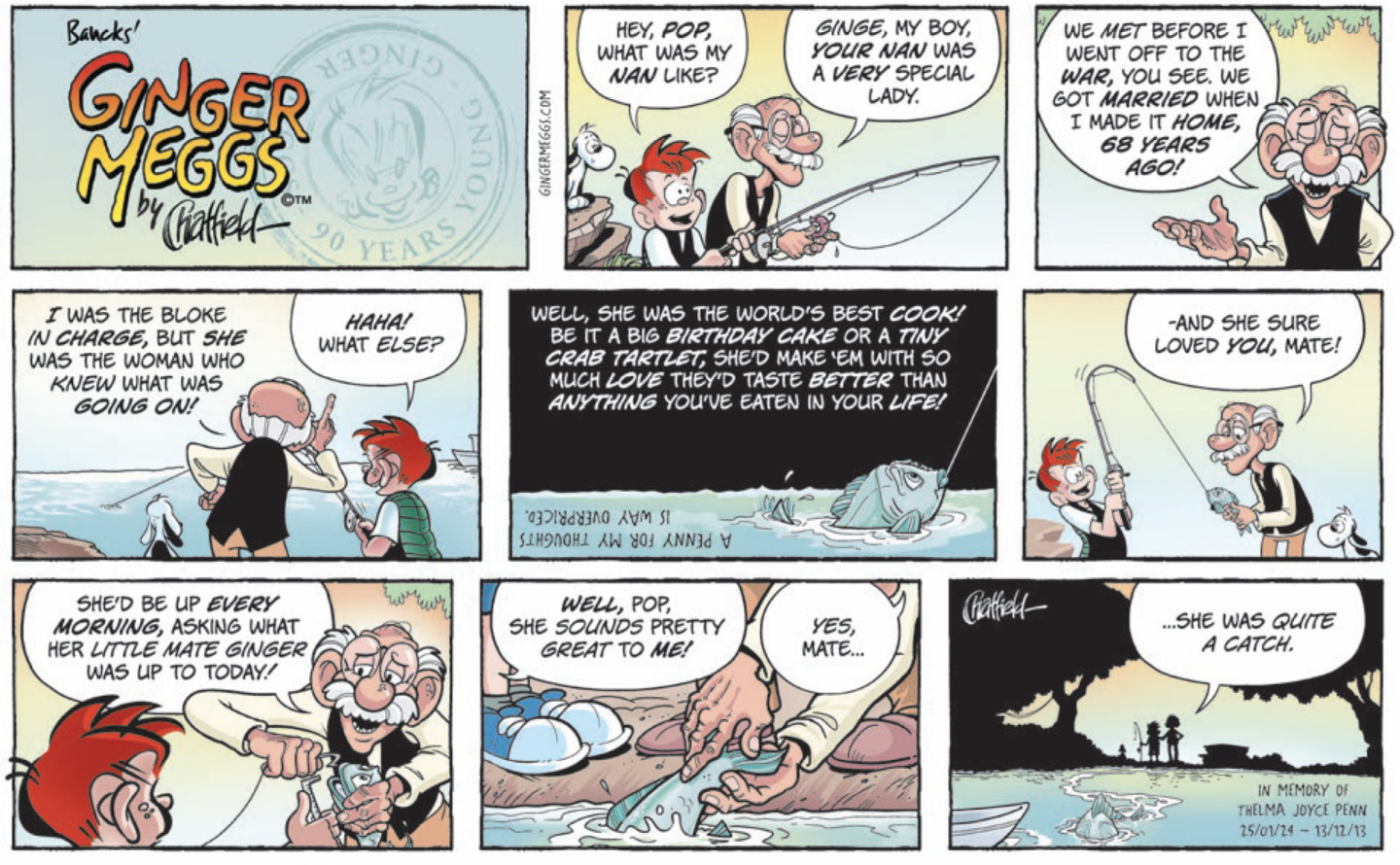