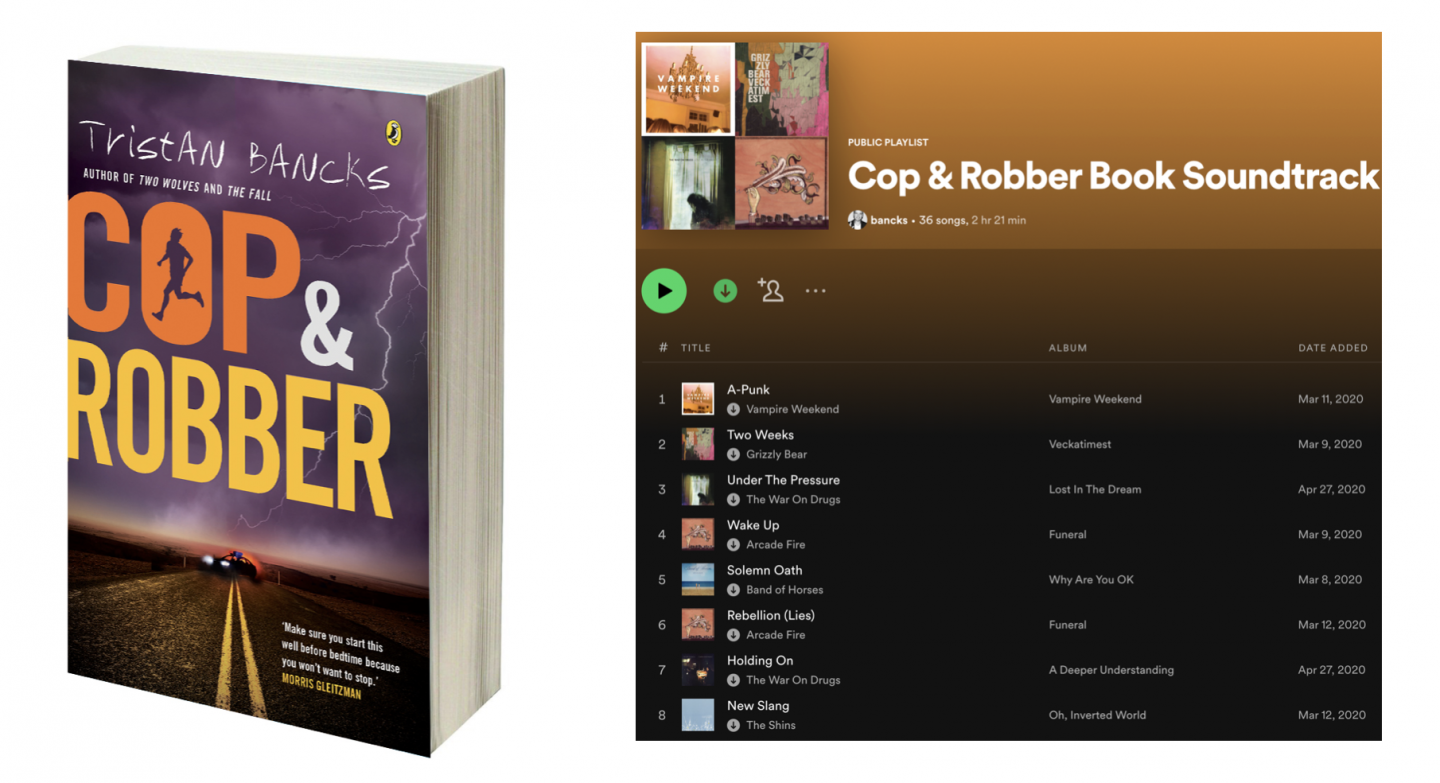 Cop & Robber, my new crime-thriller for 10-14 year-olds, has a book soundtrack that I listened to over and over again as I wrote. I tried to find songs that felt good and that captured the tone of the story. The music put me in a certain mood and that mood tapped me back in, even if it had been a week, a month or a year since I last worked on it.

My work-in-progress, Scar Town, was started in 2009 and every time I return to the story I listen to the music which takes me back to the way I felt when I was first excited about it. (I wonder if I should have changed the soundtrack and I might have finished it in 2014.)

Origin of the Book Soundtrack

I first started listening to loud music when I was writing back in 2007 when my boys were little and I had to work from home and the only way I could switch out of Dad mode and into Writer mode was by putting on my headphones, turning the volume up to 10 and getting down to it. The music became a trigger for me that said, ‘It’s time to work’ so, even now, when the music’s on the words start to flow. Not always, but it’s fairly consistent.

Music also fills up the headspace I might have to stop and check socials or email or do the million things on the to-do list. It creates a cone of concentration.

Selecting Songs For the Book Soundtrack

The soundtrack is very specific to the writer. It grows as the story grows. Certain songs that felt right at the beginning of the process start to clang and jangle against the story when it’s in its second or third year of writing. Those songs are kicked off the list.

I, often, hear songs on the radio or in a shop and I’ll ask the shopkeeper or my phone what the song is. I’ll start a Spotify radio playlist around it, which throws up hundreds of other songs with a similar feel, some of which are dragged into the playlist.

People ask if I listen to instrumental music because lyrics can be annoying, but I forget about the lyrics after listening to the track over and over again. (The play count for soundtrack songs on my Spotify wrap for the year is in the hundreds.)

Some tracks, like A-Punk, the first song, could be the most annoying song in the world to some people and impossible to write to but, for me, it told me, ‘It’s work time’. It’s a fun, fast-paced track and allowed me to dive down into the story.

IF YOU’D LIKE TO READ THE BOOK, ASK YOUR LOCAL BOOKSELLER OR BUY ONLINE VIA PENGUIN HERE. IT’S AVAILABLE AS A PAPER BOOK, EBOOK OR AUDIOBOOK.

OR YOU CAN GET A PERSONALLY SIGNED BOOK BY VISITING MY ONLINE STORE.

FOR UPDATES ON MY BOOKS, NEW POSTS, UPCOMING TOURS AND GIVEAWAYS, SIGN UP FOR MY MONTHLY ENEWS.

GAIN INSIGHT INTO MY OTHER BOOK SOUNDTRACKS HERE.